It’s apple orchard season and my new favorite is Blakes in Armada, MI. This place is a magical wonderland. We took a family trip there a couple of weeks ago and had such a great time. There were so many fun things to do and it was a more than perfect, sort of gloomy, gray and slightly rainy fall day. The best part was that Auntie Kyla was with us to experience it all. We started the day off with a flight of three seasonal ciders made there at Blakes and some tasty appetizers…phyllo stuffed with brie and pear, a spinach and artichoke dip and a charcuterie plate. All so yummy!

Once we were full….and slightly buzzed, we took a look at the shop. Caramel apples, hot cider, cold cider, doughnuts, and jelly were all purchased along with some pickled green beans for Raya. (One of her favorite snacks.)  They had so many different jams and pickled veggies I could have spent an hour, and 100 dollars, in that store.

After we were fed and all shopped out we decided to walk around in the kid’s fun adventure play area (not the actual name). There were playgrounds, and hay mountains for climbing. We saw talking skeletons, a live, not so real, band in a carriage, and a miniature town that look like the wild west but was filled with a ton of friendly bunnies. 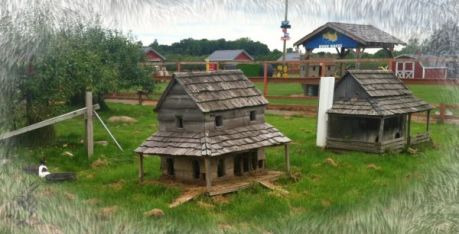 A town for bunnies. 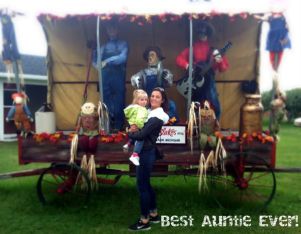 Raya and her Auntie Kyla, watching the band 🙂

Raya played in a play area that looked like it was built for an over sized hamster (that’s actually kind of scary to think about) and she rode on a pony made of tires. There was a million wooden objects such a boat and train that were built for exploring in and climbing on top of. We could barely cover it all and had to leave quite a bit for another day, along with the pumpkin shaped bouncy house and petting the REAL ponies.

It was such a wonderful day to spend with my family and I can’t wait to make another trip to Blakes. So far I can say that Fall is not all that bad, it is my birthday season after all 😉 and what could be bad about that. This adventure is going in the books as one that Raya and I will never forget.

One thought on “Hello Fall :)”